Bernard "Bunny" Blaney was born and raised in Coaldale. But his widowed mother remarried and the family moved to Newark, Del. when Blaney was in the 8th grade. It was there that he forged a name for himself as one of the greatest high school athletes in that state's history.

Had he stayed in Coaldale, who knows? For one thing, he would have been in the same backfield as the great George Welsh, who went on to All America fame at Navy and later became one of the nation's most successful college coaches.

The following column, reprinted, with permission, was written by a staff reporter for the Delaware News Journal. It details the life of Blaney, who died at age 68 early last week.

Bernard "Bunny" Blaney was the best athlete in Delaware, funny and good-looking, rolling around the Newark High campus on a blue scooter, entertaining his friends on the ukulele.

In an age when high school sports stars enthralled communities, Bunny Blaney crafted a legacy that 50 years later is almost hard to believe.

"In my opinion, he was the greatest high school player to ever come out of Delaware," said Robert Townsend, a lifelong Delaware resident who played football with Blaney at Newark High and also attended Duke University with him. "Bunny Blaney was bigger than life."

Blaney, 68, died Monday (Sept. 30) night at Duke University Medical Center in Durham, N.C. He had been in intensive care after having surgery Thursday for a pulmonary embolism.

Blaney moved to Delaware from Pennsylvania just before high school, then settled in North Carolina after playing football at Duke for former University of Delaware coach Bill Murray. Though his time in Delaware was short, the trail he blazed left embers that still burn in the memories of his friends and family and in the history of the state.

He was inducted into the Delaware Sports Hall of Fame in 1981, and a life-sized cutout of Blaney is prominently exhibited in the hall's new museum at Frawley Stadium.

"There's no question that he was special. Any time anyone talked about Newark or baseball or basketball or football, his name was right out there," said Dallas Green, who played for and managed the Phillies after a career at Conrad High that included matchups with Blaney in every sport. "It was unusual to be a four-sport star, and he was a pain in the butt for all time. He killed us in football. We beat him a couple times in basketball, but we had to put one guy on him and dog him the whole time. He was a great athlete and a good kid. I really liked him. He came out to play every game."

As a baseball player, he attracted the attention of several pro teams. He did it all at just 5-foot-7 and 157 pounds, hardly imposing but impossible to forget. "He was by far the best all-around athlete I ever coached," said Ray Ciesinski, who coached at Newark High for 32 years and had Blaney in football, basketball and track. "You get one athlete like that in a lifetime."

At Duke, Blaney played in a conservative offense with a future NFL Hall of Famer, quarterback Sonny Jurgensen. Blaney made his mark in moments of brilliance, catching a 75-yard touchdown pass from Jurgensen in one game, and returning the first kickoff he ever fielded for a 97-yard touchdown. (At Duke he played against Welsh's Navy teams on two occasions).

He coached high school football in Durham in the decade after his playing days, winning a state championship and earning state coach of the year honors. He moved on to a career in sports fitness, retiring from his role as fitness advisor to a local textile company in 1998.

Tough lessons learned by Blaney in high school shaped his life just as much off the field as on it. In December of 1952, 11 months after he was named Delaware's athlete of the year, Blaney was arrested. He was charged with being part of a gang of 11 Newark students that burned down an old barn and committed 52 breaking-and-entering offenses. A freshman at Duke, Blaney was given a year's probation and was required to file a monthly report with his probation officer.

Blaney addressed his transgression at his Hall of Fame induction in 1981. "There is a difference between reputation and character," Blaney said, "and I was to find that out. Reputation is what you think you are. Character is what you really are. I got those two mixed up, and I got in some real trouble. There was some pressure from my peers to get a reputation."

In the end, it only reinforced his character and helped Bunny Blaney find out who he was. In 1966, he was named the Young Man of the Year in Durham, the award citing the "healthy, tremendous influence he has on the youth of this city."

But it turned out that he wasn't always Bunny. That nickname was applied as a baby, when instead of toddling around, he hopped like a rabbit. It stuck because he was rabbit-quick. Ciesinski claimed that Blaney was constantly called for traveling in basketball because he moved too quickly for the referees. But after college, Blaney decided the real world required a real name, and he went by Bernie.

"But for years, I didn't even know he had another name," said his wife, Etta Lou, who met Blaney at Duke, married him the day after she graduated and was with him for 46 years. "He kind of outgrew it, but in my heart and mind, he was always Bunny."

Bunny is what he always was, and always will be, to his fans in Delaware. He remains an athlete impossible to forget. Blaney is survived by his wife, Etta Lou; three children, Robbie, Bonnie and Tim; and five grandchildren.

Thomas Francis Hall (born April 3, 1940 in Wilmington, Delaware) is a former American football wide receiver who played in the National Football League. He played eight seasons for the Detroit Lions (1962–1963), the Minnesota Vikings (1964–1966, 1968–1969), and the New Orleans Saints (1967). He played college football at the University of Minnesota.

In 1980, Hall was inducted into the Delaware Sports Museum and Hall of Fame.

Played for Sallies, All State in 1957: http://www.delawareallstatefootball.com/1957.html

#7    Jamie Robert Duncan
(born July 20, 1975) to James and Bertina Duncan, is a former American football linebacker in the NFL. He was drafted by the Tampa Bay Buccaneers in the 1998 NFL Draft. He also played for the St. Louis Rams and Atlanta Falcons.

A two time All-American and the 1997 Southeastern Conference Defensive Player of the Year, Duncan starred for the Commodores from 1994-97 before being selected in the third round of the 1998 NFL Draft by the Tampa Bay Buccaneers. Duncan's NFL career lasted seven-years that included stops in Tampa and St. Louis before his final stop in Atlanta in 2004.

In 2009 he was selected to be honored as one of the SEC's Legends of the Game.

He currently resides in Tampa, FL.

Jamie was a two time Delaware All Stater from Christiana High, 1991, http://www.delawareallstatefootball.com/1991.html

Former Newark High football players include Conway and Gary Hayman. After a great career at the U of D, Conway played part of his pro career with the Houston Oilers, blocking for Earl Campbell, and after graduating from Penn State, Gary played for the Buffalo Bills. 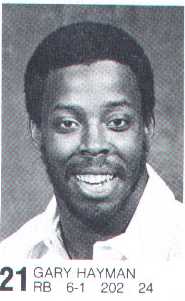 Running Back, Buffalo -- "It's an opportunity, what I've been looking for. I've been behind O.J. Simpson for two years, and that's a rather remote position. I learned a great deal from that, but what's needed now is for me to play." 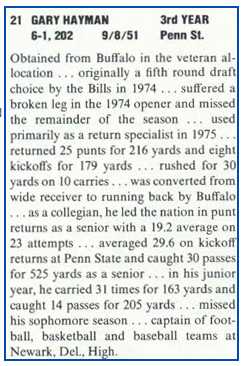 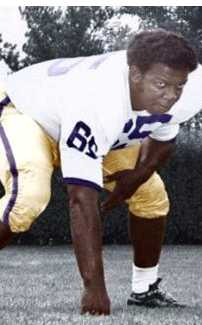 University of Delaware, Hayman was a lineman at the University of Delaware in Newark where he played from 1968 through the 1970 seasons. Hayman's Blue Hens garnered three consecutive Lambert Cup titles, three straight Boardwalk Bowl wins, and two straight Middle Atlantic Conference championships. Hayman was a consensus first team All-American and All-East selection at offensive guard in 1970 and was a two-time All-MAC selection. From his accomplishments at Delaware, Hayman was inducted into the state of Delaware Sports Hall of Fame. Hayman was the second athlete from the school to play in the NFL.

Hayman played for six seasons with the Houston Oilers, for a total of 77 regular season games in the NFL as an offensive lineman. He was drafted in the 6th round (141st oveall) in the 1971 draft by the Washington Redskins and subsequently traded to Houston.

Hayman served as an assistant at Texas Southern University and Florida A&M University.

In 1986 the Delaware Sports Museum and Hall of Fame inducted Hayman.

Oops! This site has expired.

If you are the site owner, please renew your premium subscription or contact support.